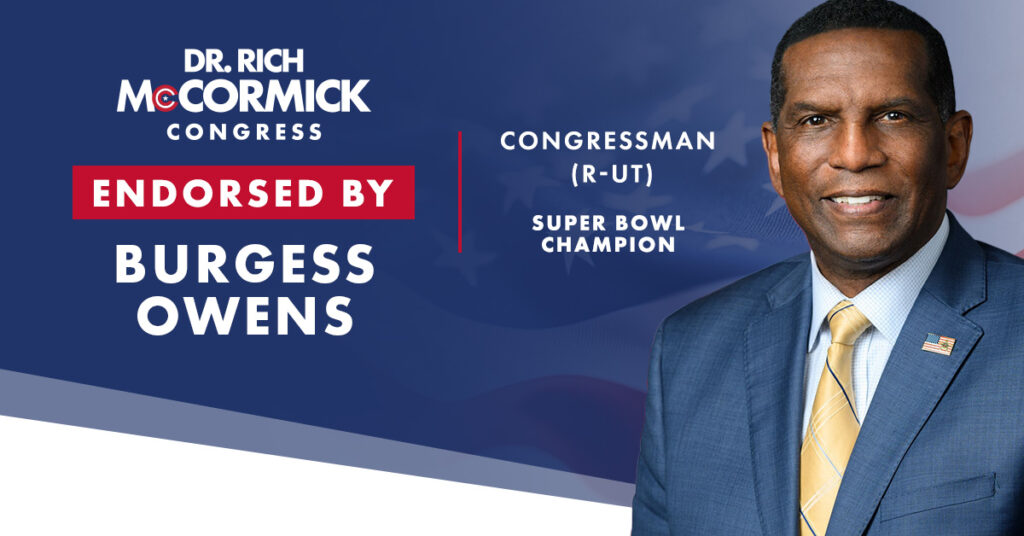 “I am pleased to endorse Dr. Rich McCormick in his campaign to be the next U.S. Congressman from Georgia’s 6th District.  Dr. McCormick has spent a lifetime in service, first to our nation as a Marine and now in our community as a physician treating COVID-19.   Congress is full of lawyers all too willing to restrict our liberty with draconian mandates and lockdowns. Congress needs more doctors. Problem solvers that understand the challenges we face and are willing to revive America’s freedom.  For me, that doctor is Rich McCormick.  He has my full endorsement to represent Georgia’s 6th district in the United States Congress.”

“Congressman Owens is an accomplished businessman, athlete, and public servant and I am honored to have his endorsement,” said McCormick.

“In Congress, I’ll partner with unapologetic conservatives like Burgess Owens to stop the radical Biden/Pelosi agenda that’s crippling our economy, undermining public safety, threatening national security, and growing the size and scope of the federal government. We will stand together in the fight to Revive Freedom and Save America.”

In the latest poll, McCormick has a 22-point lead in the race to represent Georgia’s 6th District in Congress.  Dr. McCormick is also the fundraising leader with $1.1 million Cash on Hand. He is proudly endorsed by The Club for Growth PAC, Frontline Patriots PAC, SEAL PAC, and numerous members of Congress including President Trump’s doctor, Congressman Ronny Jackson.