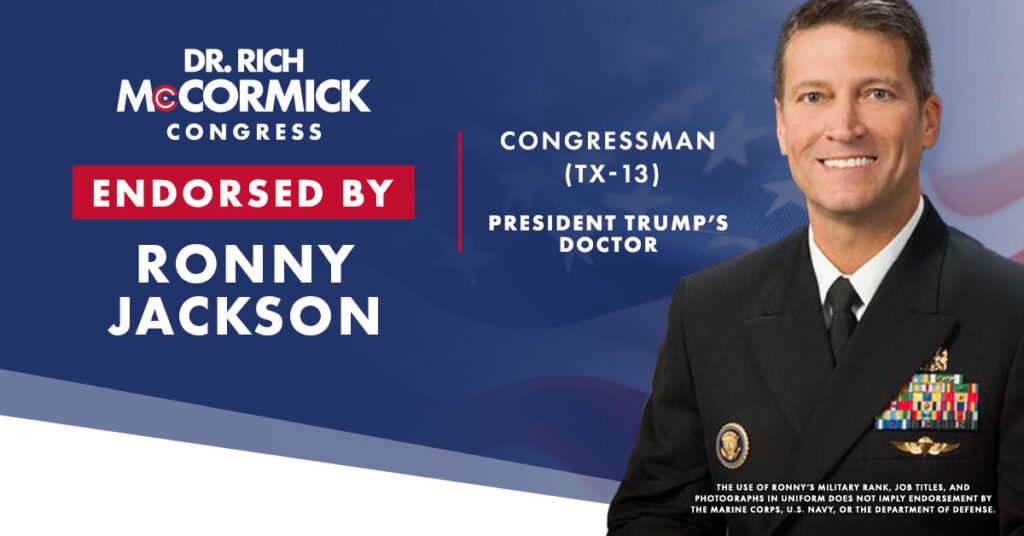 “Having served as Chief Medical Advisor for the Trump White House, I’ve witnessed first-hand the deceitful tactics, distortion of science and outright lies the far left used to scare the American people into giving up essential freedoms,” said Jackson. “Dr. McCormick has been on the front fighting for the truth. Even as liberals tried to revoke his medical license, he stood up for your freedom against mask mandates and forced vaccinations.  That is exactly the type of fighter we need in Washington to stop the socialist takeover of our country. Dr. McCormick has my full endorsement.”

“What an honor to have the strong support and full endorsement of a fellow physician and veteran,” said McCormick. “Over the last two years, Ronny and I have used our expertise fight against unconstitutional and un-American government mandates. Just like in the theatre of war, we risked it all to safeguard liberty and freedom for generations to come.

“There’s no doubt that unapologetic conservatives like Congressman Jackson are backing my run for Congress because they know I’m a fighter and will do whatever it takes to stop Joe Biden, Nancy Pelosi, and the radical Democrats that control Washington D.C. We will take this country back in November and champion America First policies that will make this nation safe, strong, prosperous, and free.”According to a new poll, McCormick has a 22-point lead in the race to represent Georgia’s 6th District in Congress.  McCormick has also emerged as the fundraising leader with $1.1 million Cash on Hand. He is proudly endorsed by The Club for Growth PAC, Frontline Patriots PAC, SEAL PAC, and numerous members of Congress.