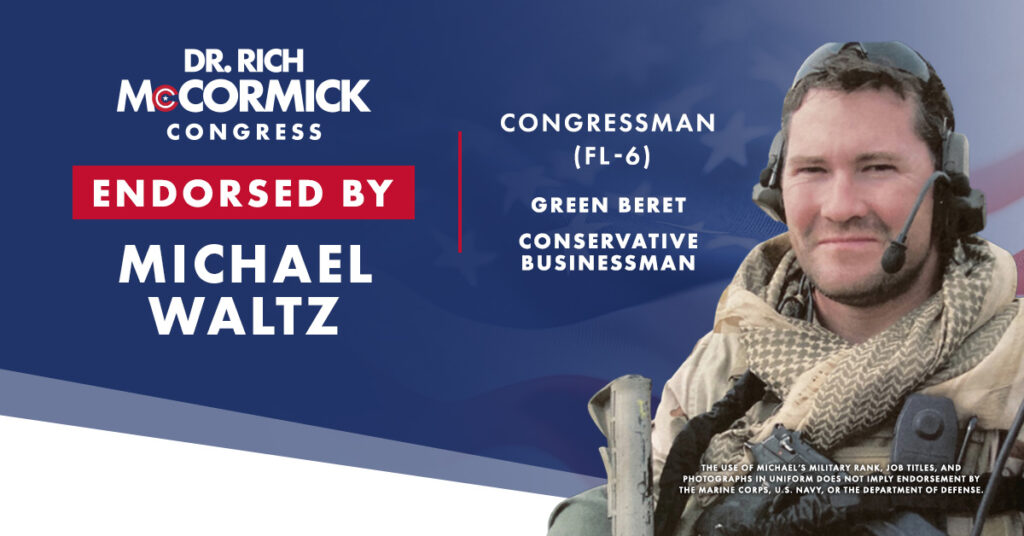 “Like Commander McCormick, I served in Afghanistan,” said Congressman Waltz. “As veterans of that war, we understand the devastating impact Biden’s hasty retreat had on America’s credibility and our military’s morale.  America needs more servant leaders like Dr. McCormick in Congress with an eye toward protecting our nation and its military from poor White House decisions.”

“The failed policies of Joe Biden and Nancy Pelosi have undermined public safety and threatened our national security,” said McCormick. “Our borders are broken, our elections lack integrity, and the freedoms we hold dear are under constant attack. That’s why I’m honored to have Colonel Waltz’s strong endorsement in this race for Congress.

“As proud veterans, Col. Waltz and I have fought overseas to safeguard the values that made America great and will we do it again at the U.S. Capitol. From championing pro-growth, pro-jobs legislation to locking down the border and deporting the illegal immigrants on American soil, we will stand shoulder to shoulder in this fight for America’s future.”

In the latest poll, McCormick has a 22-point lead in the race to represent Georgia’s 6th District in Congress.  Dr. McCormick is also the fundraising leader with $1.1 million Cash on Hand. He is proudly endorsed by The Club for Growth PAC, Frontline Patriots PAC, SEAL PAC, and numerous members of Congress including President Trump’s doctor, Congressman Ronny Jackson, and Congressman Burgess Owens.​​