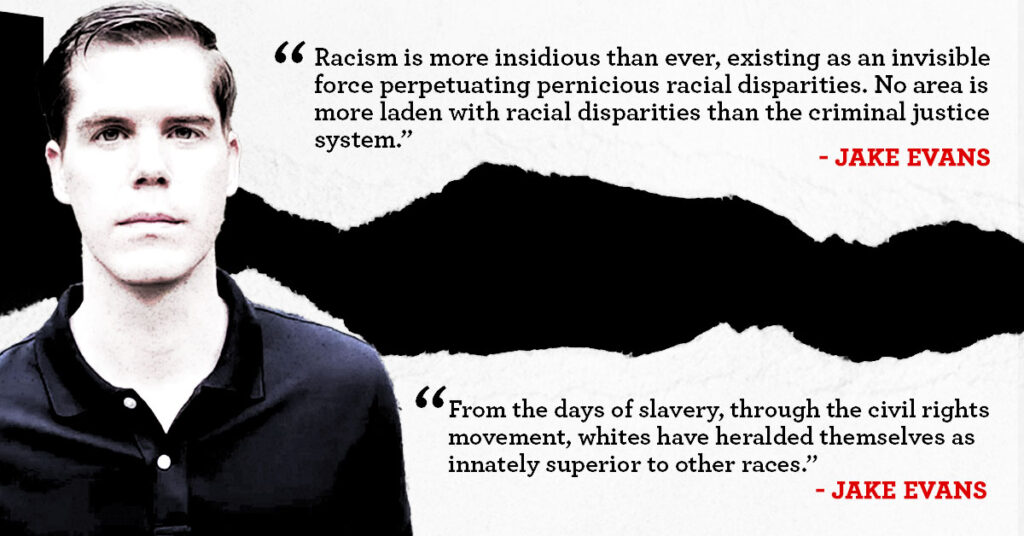 Evans campaign in a tailspin after radical beliefs go public

SUWANEE, Ga – Jake Evans’ congressional campaign is reeling after a 23-page woke manifesto surfaced, in which the activist lawyer calls the entire criminal justice system racist. He also parrots proud Communist Angela Davis, whom is cited in the paper, with his own plea to Defund the Police.

In a blatant attempt to bury the damning essay written while Jake Evans was a practicing attorney, his campaign has threatened legal action, accusing the McCormick campaign of “false, misleading, and inaccurate information.”

Obviously, Evans’ crack legal team failed to read his rambling manifesto before firing off their feckless missive. Jake couldn’t have been more clear in his demand to Defund the Police:

As defined by Wikipedia, the free encyclopedia, “the criminal justice system is a series of government agencies and institutions. Goals include the rehabilitation of offenders, preventing other crimes, and moral support for victims. The primary institutions of the criminal justice system are the police, prosecution and defense lawyers, the courts, The probation service and the prisons system.”

“Jake Evans knows that his woke manifesto will prove once and for all that he’s an absolute fake,” said Dr. Rich McCormick. “That’s why he’s pulling out all of the stops – even threatening legal action – to hide this document from voters of the 6th Congressional District.

“Well, we refuse to back down from this fight because Georgians deserve to know the truth about Jake. If elected, I will stop Joe Biden, fire Nancy Pelosi, and send the D.C. Democrats packing. Based on his own words, Jake Evans will go up to Washington and join the radical left in their efforts to undermine public safety and Defund the Police.

“The real conservative in this race couldn’t be clearer.”