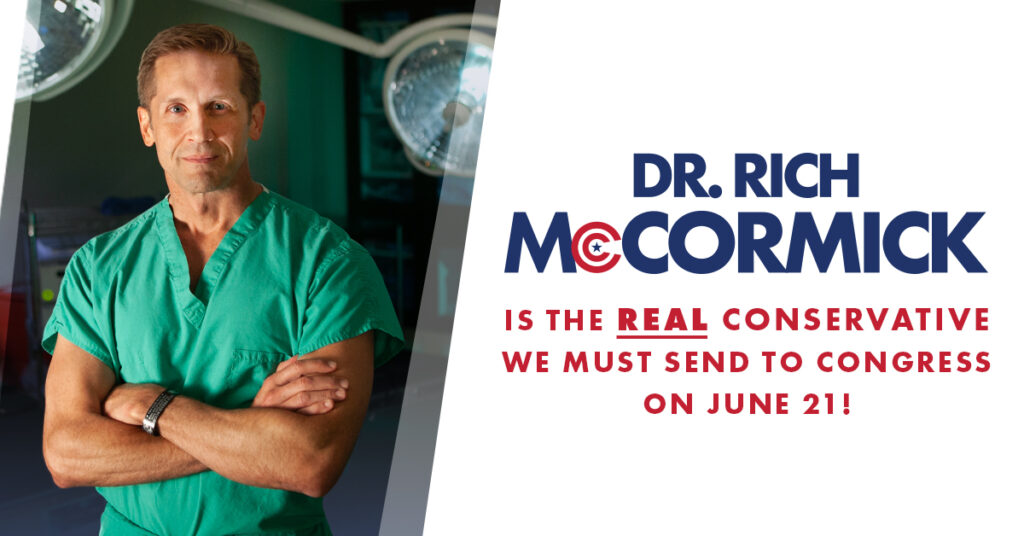 Rich McCormick is a real conservative with a lifetime of experience and unmatched record of service. As a Marine Pilot, Emergency Room Doctor, and father of seven, there’s no doubt that Dr. Rich McCormick is tough enough to stop Joe Biden, fire Nancy Pelosi, and stand up to the woke mob. He refuses to compromise his conservative values and will fight around the clock to fix the economy, lock down the border, and Revive Freedom from coast to coast.

Jake Evans is a woke activist lawyer and fake conservative with a troubling past. He attacked Georgia’s religious liberty legislation, criticized President Trump for not advancing gender equality, urged abortion backers to join the GOP, and embraced the MeToo movement that was weaponized against conservatives.

Worst of all, Fake Jake Evans recently penned a rambling 25-page manifesto inspired by radical Communists where he called “whites” and the criminal justice system racist, attacked law enforcement, and pushed to Defund the Police.

“Elections are about choices and there is a clear one to make for voters of Georgia’s 6th Congressional District,” said Dr. Rich McCormick. “I’m running on my record of service in the military, emergency room, and in our community. I’m unapologetic about my conservative values and support for low taxes, limited government, religious liberty, safe streets, the 2nd Amendment, and life. If you want a real conservative who will deliver real results in Congress, I humbly ask for your vote.

“My opponent is a fake conservative with a disturbing agenda. He applauded the veto of legislation to protect people of faith, trashed President Trump, and stood up for Hillary Clinton and Nancy Pelosi. If you want an activist lawyer who thinks that white people, law enforcement officers, and the criminal justice system are racist, vote for Fake Jake Evans. Given his record, just don’t be surprised when he caves to the woke mob, defunds your local police department, and applauds CRT being taught in public schools.”